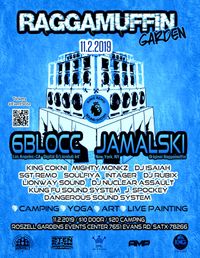 Raggamuffin Garden-Biggest sound system event in SATX. Family Friendly, music, camping, yoga, live painting, and art. Powered by King Remo Sound!King Remo Sound System and AMP presents a night of sound system culture. Sound system culture has influenced many genre's of music all around the globe. This amazing event in San Antonio, TX brings together and showcases many of these various elements in an outdoor, all-day, family friendly event. There will be music, yoga sessions, live painting, art, food, and overnight camping. FEATURING :-6Blocc (Official fan page) aka R.A.W aka BBOY3000 is one of the champions of dubstep, jungle, reggae, dnb, and footwork in the U.S. Renowned the world over, the prolific producer and performer has been active on the touring circuit for decades performing worldwide including Russia, Europe, Japan, Canada, Mexico & more. He has released a multitude of releases including 14 vinyl and many digital albums. He has produced or remixed music for the likes DJ Muggs, Bassnectar, Diplo, DUB FX, Ranking Joe, Snoop Lion, Jigsy King, Chuck Fender, Jr. Demus & Jr. Cat. - JAMALSKI OFFICIAL Agitator since 1991. Who else but this NYC MC, can boast about driving BPM counters crazy, making clubbers and party people go hysterical, and also breaking the barriers between Hip Hop, Ragga, Jungle, Funk, House, Dub, Techno and Drum’N’Bass? When he talks about his vision of Drum’N’Bass...Jamalski does not speak about what we think we already know: “For me, Drum'N'Bass is futuristic Punk-Rock. A very underground sound which takes its roots in Hip Hop, Dub, Rave scene or Techno from Detroit but also in Bad Brains music and from all the artists who broke musical barriers…I’m part of the people who don’t make music to please radio programmers.”As if this was not enough, we united with the most recognized names in the region to make this great line up more amazing. Each is a leader in their respective genre and will only help to make this great event even better. -UK native MC/DJ King CoknI O'Dire will be present to toast the mic bringing his ragamuffin badman style to the Alamo City.SAN ANTONIO HEAVY-HITTERS:-DJ Isaiah (Bruk Out)This selector de sabor will bring out the tribal latin flavor on the dance floor that will make you move to Cumbia, reggaeton , salsa y mas! If you like Dancing this DJ will make sure you leave the dance sweating!!!-Mighty Monkz (2ten Platoon/M.I.A/AMP)One of the Pioneers of the DNB SCENE in San Anto. This man is not from Earth, He is a supernatural being with magical powers to tell a futuristic story through frequencies of sound and his vocals LIVE! Vibe with Monkz to some Jungle,Ragga,Rollers,Reggae,Dancehall, and probably a lot more that will leave you surprised! -Intager (Eye Ten Records) Original Selector that has been rinsing out dance floors since the mid 90s. Intager has been producing his own music for decades. Bringing you a DUB BASS culture vibe that will send your mind into a different dimension. Pure Scientist on the ones and twos that you do not want to miss..-Sgt. Remo (King Remo Sound System)Owner of the KRSS rig, King Remo is a Artist and poet .. With his Massive Videos to his dedication and devotion to the Sound and Culture . Be ready for and relaxing vibe toast your soul free! Sgt Remo will be dropping Roots, Reggae, Dub and Jungle to spice it up! -DJ Rubix (San Antonio) Time to get Futuristic Funky with the one like Rubix. You will need to re-stretch for this one, Any injuries will not be covered during his set!! Tie your laces up and dance to his mixing of Juke, Footwork & Trvp that will definitely get your blood flowing and your body moving!-J. Spockey (King Remo Sound System) Time to get Vibey With the one like J.Spockey !!! This Selector will terminate any disbelief you might have of DUBSTEP ... Your inner self will enjoy his mastery of mixing!! Come witness J.Spockey Dropping Some amazing Organic Dubstep with Reggae.. -DJ Nuclear Assault (Universal Bass Entertainment)If you're ready to jump on a plane and end up in 2099 then this is your CAPTAIN for your Flight! Get ready to get rinsed properly with some mind-melting DRUM N BASS & JUNGLE! Pure high energy vibes will experienced during the set! As we say in the DNB world, BOH BOH BOH ! -Lion Way Sound (Austin TX JUNGLISTS CREW)Austin based Lionway Sound will make their way south to provide that big JUNGLE sound !! Dub plate BAD BOYS Lionway selectors making the vibes right with there unique selections . giving you a JUNGLE , Ragga, Roots Set on Vinyl!!Dangerous Sound System (Austin, TX)Dangerous Sound is one of Austin's newest sound system. Owner/operator DNGR is a long time reggae musician and avid promoter of everything reggae. Together with Jah Bill they deliver an energetic reggae experience!Kung Fu Sound System (San Antonio, TX)San Antonio's own Kung-Fu Sound System will be spinning their lively vinyl selection covering everything Ska, Reggae, & Soul. Based out of Dallas and San Antonio, We will also feature sessions by our professional instructors, live painting, and various art participants. The full schedule of activities will be posted on the Facebook event page. Camping is available on the grounds for those who would like to enjoy the night at Rozelle Gardens. There is ample primitive camping sites available. There are bathrooms available for our campers throughout the night. No showers or RV hookups available.Event starts 2PM and Ends at 2AM $10 General Admission$20 General Admission with Overnight CampingKid Friendly Pet Friendly good vibes ONLY